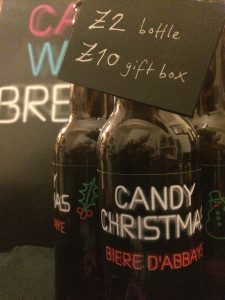 Sometimes as a copywriter you are asked to write about something boring and paid reasonable money for it.

Sometimes as a copywriter you are asked to write about something interesting and paid nothing for it.

This is a tale, fortunately for you, reader, comfortably within the second of these categories.

My mate started brewing beer. Like a teenager does. He bought the same kits. He delivered the same foul, often extremely potent, results.

Then he took it seriously.

He sought out the proper equipment. He multiplied suggested ingredient quantities by two, and then five and ten. He paid complete attention to sterilising advice.

And the beer got better, became drinkable, didn’t make you want to crush your head in a vice the next day.

But he was printing labels via a crappy template on his work printer. And sticking them to old bottles (with remains of original labels still visible) with milk. Yes, MILK. It was quite effective for the sticking bit, but not so great when you got a whiff on raising the bottle to your mouth.

He needed branding help. And by jiggery that’s what he got.

He’d decided to call the operation ‘Candy Wharf Brewery’, after the building in which it was based. Familiar with the building’s architecture and its distinctive coloured balcony lighting, I set to work on a logo. The neon glare of 80s LA ‘cocktails’, ‘strip club’ and ‘Budweiser’ signs provided some extended inspiration, and linked yet further to my brewing mate’s (and my own) fascination with the musical genre of ‘hair metal’, AKA ‘poodle rock’. The glitz of the Sunset Strip, the sleaze of ‘Girls, Girls, Girls’, and the excess of the era’s protagonists. I’m talking about you, Mötley Crüe.

Soon, a label for first-batch-for-public-consumption, ‘Candy IPA’, was ready, and professional stickers were applied to new bottles. Beers was drunk. Beer was sold, with some confidence that it wouldn’t poison people, at local and artisanal events. A selling point backdrop was made, and press releases and CWB histories were written. T-shirts were printed. The legend was born.

Further batches were made based on Belgian and American recipes and hops, and sub-brands followed.

And let Candy be your poison. 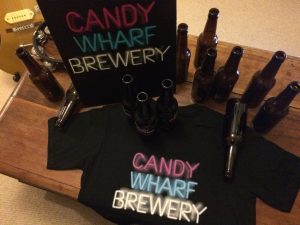