The Handball Rule (part I) 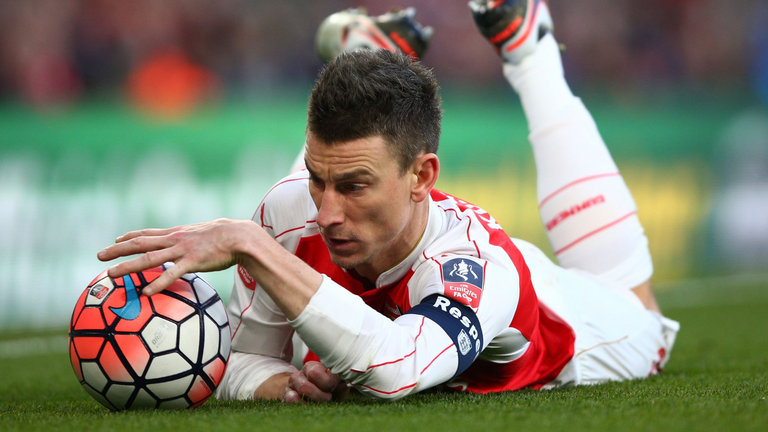 I wrote most of this article a couple of years ago but never got round to posting it. In July 2018, it seems more relevant than ever.

The World Cup’s finished. And the Community Shield, unbelievably, is a mere fortnight away.

You’d probably have expected the majority of football rule/refereeing chat to be about VAR (even though it’s not coming to the Premier League yet). But no. Instead we’re talking about the oldest of rules, the one that actually kind of defines football.

It’s something we’ve become increasingly accustomed to in recent Premier League seasons, and interpretation of the ruling had ‘more than a hand’ (come on!) in deciding the bloody World Cup Final, no less. It’s not just me bleating on about it either. Even Ossie’s piped up!

I had me a lil’ look at the official FIFA ‘Laws of the Game 2018/19’, which you can wade through here if you fancy losing a couple of days of your life.

Let’s give the handball section a quick once-over.

It starts: ‘Handling the ball involves a deliberate act of a player making contact with the ball with his hand or arm.’

Blimey, problems already. Handballs are given left, right and centre for non-deliberate handballs, aren’t they? Do we really imagine Ivan Perisic thought ‘I know. I’ll just pat this one out for a corner. Nobody will see.’?

In refs we trust

FIFA states ‘The referee must take the following into consideration:’

Okey doke, there’s an early admission that the man in black (or Day-Glo) needs to use interpretation/discretion.

So players have to make an effort to commit a handball. Fine. But this suggests a player running around the pitch with arms outstretched is OK, even if a ball hits one of them. Which doesn’t really tie in with all this ‘unnatural position’ talk. (Incidentally, the word ‘unnatural’ doesn’t appear once in the FIFA document.)

‘The distance between the opponent and the ball (unexpected ball)’

So what’s the distance you can’t possibly have handballed on purpose from? Doesn’t it also depend upon how hard someone booted it towards you? Also worth noting that ’opponent’ doesn’t specify it’s the opponent who booted it. Relevant to Croatia’s pleas last Sunday, as Blaise Matuidi didn’t make contact with the ball, but surely had an influence on Perisic’s actions.

This is about the nearest the FIFA law gets to talking about natural vs unnatural position. And it doesn’t specify anything. (Take a load of random snapshots of footballers playing football. Their arms will be all over the bloody place. There isn’t a natural position for your arm to be in when you’re challenging for a high ball, trying to make a block, or sliding into a 50/50. It certainly isn’t ‘linked behind your buttocks’ like you’re still listening to the national anthem.)

There used to be a couple more points in this section of the FIFA rulebook – but thankfully they’ve moved the ‘touching the ball with an object held in the hand’ and ‘throwing your boot or shinnie at the ball’ to another section.

Then there’s a paragraph clarifying that the goalkeeper is basically an outfield player outside of his box when it comes to handling. Which seems fair enough at face value. But then again, what happens if a keeper intentionally handles a ball, but perhaps didn’t intend for that to happen inches outside his area? This is a different situation to that of an outfield player, who shouldn’t be ‘intentionally handling’ the ball anywhere. Hmmm.

And what do the powers have to say in terms of punishment for handling offences? 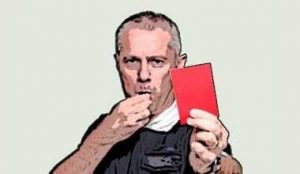 Well ‘handball’ pops up again in their sections on ‘Cautionable offences’ and ‘Sending off offences’:

‘Handing a ball to interference with or stop a promising attack’ earns you a yellow. And you probably deserved it.

‘Handling the ball in an attempt to score a goal’ also gets your name taken.

As does handling it ‘in an unsuccessful attempt to prevent a goal’.

So it went in, you waved at it on the way, and then you got booked. Ha ha!

‘Deny the opposing team a goal or an obvious goal-scoring opportunity by deliberately handling the ball’.

In the second part of my handball study, I attempt to right the wrongs by creating a new handball rule. By the way, in case you hadn’t guessed, this is all a bit more complicated than I’d hoped when setting out to embarrass the footballing authorities…