JCVD at the peak of his powers

I want to look like Jean Claude Van Damme. I’m going to earn a million quid. I will be an astronaut by next Christmas.

What do these three statements have in common? Other than being… err… aspirational?

At least on their own, anyway.

If you want to change yourself, your life and your gut for the better, you need manageable, achievable targets. There’s nothing to say you can’t become a dead-ringer for a Belgian hard man, a smug shit of an entrepreneur, or the person to make NASA dust off its shuttles. Maybe the last one’s a bit of an ask… but even quite lofty goals can be realised if your resolutions are tackled in the right way.

‘Change job’ is a worthy resolution for some. But on its own it’s incredibly daunting unless you’ve already got a new employment offer on the table. If you really want this change to happen within the next 12 months, make an effort every month – take the resolution and (perhaps with an ‘MC’ hammer)… break it down.

You’re not going to wake up one morning, decide to tackle your resolution, and have it done by lunchtime. But, with a bit of self-discipline and some achievable steps, you could quite conceivably have ticked off any number of goals by the time Glastonbury/Ibiza/The Rugby World Cup comes knocking.

Let’s not lie to ourselves: we’re unlikely to have the same forehead vein-bulging, granny-elbowing bloody-mindedness about achieving our 2015 resolutions in October as we have in January.

So act now. But don’t put so much pressure on yourself that if you haven’t changed your life by Easter you feel like a fat, useless failure.

With the example of changing job (a bit dull as an example admittedly, but a common goal and a wholly achievable target) to hand, and assuming you’re starting from scratch, let’s set some mini-goals.

In January, you might set yourself the task of speaking to people whom you work with, and others in similar (or more interesting) lines of work, giving you a better understanding of what’s out there and what suits you. You might resolve to speak to your existing employer about opportunities within your company. You might promise to update the ol’ CV, perhaps finally pushing the paper round off the end of the second page.

These mini-goals might change as your year progresses. So draft out the steps involved in reaching ‘resolution completion’ – but be aware that your mini-achievements in January will impact upon your mini-goals for February, for example.

And – importantly – review your progress. ‘This all seems a bit like hard work’ you might say – but if you’re serious about changing things, you won’t mind checking in with yourself every month. Keep track of what mini-goals you’ve achieved, those which might need to be shunted to next month (we’re not robots), and then plan your next set of mini-goals. Ticking stuff off feels good, and will inspire you to continue.

Here’s a template I made for myself a few years ago. I had sheets for different resolutions in different areas of my life: work, hobbies, health and so on (note: having ‘relationships’ resolutions depends on others playing ball, so historically I’ve found it a difficult one to plan, force, or monitor). 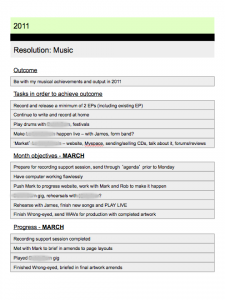 This approach works for anything.

I want to run a marathon. Good for you. But don’t try it tomorrow unless you’ve been training properly for months: you’ll probably come unstuck. Build a training regime, pick a target marathon, join a running club… these are all examples of mini-goals that’ll help you to achieve your overall aim.

I want to record an album. Check you out. Don’t wander into Abbey Road Studios this Saturday with a Casio keyboard underarm and expect to be showing the LP off on Monday though.

As a former colleague used to say when others were daunted at the prospect of a huge task: ‘eat the elephant’. I think she meant that you do it a mouthful at a time, rather than looking at the elephant and concerning yourself that it won’t fit inside you. I reckon I’ve eaten a few elephant’s legs from north London’s kebab houses, but that’s apparently a different thing.

Anyway, happy new year. And may your resolutions be achieved.