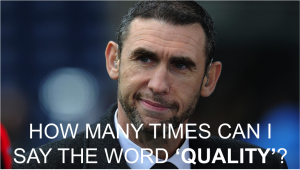 It’s that special time. The season’s finished. The year ends with an even number. Telly is shit.

It can only mean… it’s time for a load of fat ex-pros, fat club managers and soon-to-be-fat injured footballers to analyse a major football tournament for us.

I’ll do my best to keep track of the insights, bad shirt choices and Colemanballs over the next 30 days, occasionally using the hashtag #analysetheanalysts. I nearly chose #commentatorcommentary. But just to be clear, I didn’t. Excuse the odd missed match – I’ve got girlfriend’s-cousin’s-wedding or some such tomorrow (unbelievable), and I really ought to do some proper work now and again – but I’ll be inviting others to chip in and fill in the gaps.

The squads then. Who made the final cut and got their Eurostar economy class ticket in the post?

From what I can make out, the BBC have an astonishingly enormous team. Gaz Lineker anchors with Dan Walker deputising for the games he can’t be arsed with. Gabby monitors the England camp while Jason Mohammad and Stephen Watson do likewise for Wales and Northern Ireland. Guy Mowbray calls it, with unwelcome company in the box from Keown and Savage – and more welcome company from the likes of Lawro, Gerry Armstrong and Chris Waddle. And the studio crew will constitute some magic combo of Shearer, Terry Henry, Rio, Jermaine Jenas, Danny Murphy and John Hartson. Fringe players Trevor Sinclair, Kevin Kilbane, Neil Lennon and Pat Nevin also make the trip. Word is Jens Lehmann, Chris Brunt (I know), Vincent Kompany and US-based Fat Frank are calling in to prove they’re working from home.

Oui: Lineker styling it if he can leave his phone alone, Dan Walker ‘arise Rodimus Prime’, Jenas and Murphy telling it like it is (and Pat Nevin if he gets a chance), Gerry Francis’ hair.

Non: Keown and Savage, who unbelievably apparently list ‘having been a footballer’ as key inspiration for their co-commentary drivel.

Mark Pougatch keeps ITV’s host hotseat warm for a month, and gestures towards Lee Dixon and Ian Wright for opinions. Emmanuel Petit, Christian Karembeu and Richard Dunne might offer some in more exotic accents, too. Clive Tyldesley and Sam Matterface share commentary duties, assisted/hindered by Glenn Hoddle, Andy Townsend (he’s back!) and Iain Dowie. Jacqui Oatley, Gabriel Clarke and Leon Mann complete the ‘media pros’ line-up, and Lothar Matthaus, Norman Whiteside and Slaven Bilić bring ex-footballers’ perspectives. Peter Crouch’ll have the near touchline covered when everyone stands up in the row in front.

So there it is.

Watch this space, and the @RichWritesUK Twitter one, air your opinions on the coverage and the cock-ups (with #analysetheanalysts), and have a good EUROs. It might be our last if June 23rd’s vote says go. (Not really.)